Why I still support Rob Ford!


Why I still support Rob Ford! 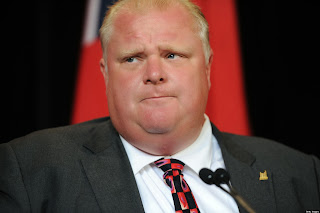 Once again the controlled main stream media is after the mayor of Toronto Rob Ford over drug allegations and a film no one has seen yet. While the mayor keeps his silence about what’s really going on I will be happy to air everyone’s dirty laundry here.
First off the so called “Crack film” is most likely not a film of Ford smoking crack, I believe it is a film of Rob smoking pot out of a glass bong. I have known many crack smokers in my day and not one of them was a fat guy like our mayor and myself. Rapid weight loss is a sure sign of a crack smoker and I don’t believe Rob Ford smokes crack. He has however publicly admitted to smoking pot more than once just like millions of other Canadians do every day. The film, if it exists is ford smoking pot not crack!

Would it be such a bad thing if our mayor was smoking pot (or crack for that matter)??? No, I don’t care at all. As long as he is doing what I voted him in for (and that’s keeping the cost of running this city down) then who cares. Rob Ford got elected in this city because he is the most honest guy in city hall. Under the Miller administration I did a lot of business with councillors at city hall, I had a wholesale picture framing business. With all the other councillors at city hall I would send them a 30 day invoice and wait much longer than that to get paid and when I did it was always a city of Toronto cheque. That’s right you paid for the pictures I did for them and that included the mayor at the time David Miller. Ford however was always a different story. He paid COD with a personal cheque out of his own pocket. His office as a councillor was different than the others as well. The other councillors all spent big money on new office furniture when they moved into city hall. Not Ford, when Ford went into city hall as a councillor he sent his staff down to the basement and pulled out some old furniture from the 60s which cost the tax payer nothing! When he ran for Mayor saying he was going to stop the bleeding of the tax payer at city hall that’s just what he did, and that’s unusual for a politician these days.

Now for these drug allegations, Rob has admitted that he has smoked pot many times just like the leader of the federal Liberals Justin Trudeau has. So what? Millions of Canadians do, we all know it should be legal and most likely will be soon. I don’t care. What concerns me more is I believe the chief of police in Toronto has been blackmailing Ford with it even before he was elected to the Mayor’s office! That’s right, the real story here is the chief of police Bill Blair may have been blackmailing Toronto politicians for years! Case in point, When Jack Layton was running in the last federal election it was leaked to the press by some un-named police source that Layton had been caught in a massage parlor raid and released without charges. Why did this happen and who was the source that leaked this tidbit to the media? I was also told by a Toronto detective that the reason Olivia Chow backed off her criticisms of Toronto police handling of the famous OCAP riot at the Ontario legislator building in June of 2000 was because she was threatened with exposure by chief Bill Blair. Seems Chow was caught in a lesbian bath house raid later that same year and while others were charged she was not.

For years I have been hearing rumors that Chief Bill Blair has been using his office and the secret knowledge it brings to blackmail and manipulate politicians in a way that would have made J Edgar Hoover look like a rookie.

I remember well when Rob Ford was running for mayor he made a speech to his supporters at a banquet hall in Scarborough where every time he paused cheers went up, except when he said he would take some of the money saved and spend it on more police officers. BAM at that point you could hear a pin drop in that room. I don’t think that was Fords idea. I think he was persuaded into that unpopular position by someone in the force who might have been holding something over him in that election campaign.

It’s my opinion that chief of police Bill Blair is the real criminal here and if we had an honest media it would be Blair whose head they would be calling for. Yes I support Rob Ford whether he is doing drugs or not because he’s the best mayor for the people and not sucking up to corporate interests like past mayors have.  Good luck Rob.

Posted by Lawrence McCurry at 1:20 PM