In the first hours of July 27, 2013 Sammy Yatim (18) was alone on a streetcar after having pulled a knife and exposing himself. Many of his friends and relatives have said this behavior was unusual for Sammy. He was at that age where he had just left home for the first time after a fight with his father about finding employment and may have been at the crisis point in his life that all young men face at one time. He never had the chance to get over that hump in life however as a young Toronto police officer shot him nine times and then another tasered his corpse for good measure.

This is not the first time Toronto police have acted with quick and deadly violence when de-escalation and a more human approach may have been called for. The big difference in this case is there was more than one very good video clip with sound that was released by the main stream media right away. As this kind of film and the exposure it was given often does, it affects people on an emotional level, people who tend to act from a gut level reaction. It also sets in motion a response from people who will take advantage of these people for their own political ends.

Almost right away a protest was called and promoted in social media. I did not attend this first protest as I was sure it would be the circus that it was. My good friend Greg Renouf did however and covered it with insight on his blog site.

I fully supported the idea of this second protest as a clear message needed to be sent to Chief Bill Blair about the heavy handed and violent state his police department has deteriorated into in this city. I had also hoped that this protest would be more dignified and the fringe element might work to keep the stupids and nut jobs in check. But once again they too were out in droves.

The day started with a couple of interesting things. First Chief Blair called an enquiry into the shooting appointing department friend and retired Judge Dennis O’Connor. Enquiries and recommendations from past hearings and investigations have not been implemented by the chief or his department so why he thought this time around would do anything to placate the public is anybody’s guess.

The second interesting development was The Ontario Federation of Labour (OFL) Called a press conference with relatives and family of past police shooting victims. Yatim’s family was conspicuously absent. One cannot help but wonder how the leadership of this union came to the conclusion that its membership had given it the mandate to get involved in political matters that have nothing once so ever to do with this union? There are however ties between the unions and the fake activists/socialist anarchists (Black Bloc) that think they control all protest and social justice matters in this country. Members of this union realize that some of the alternative media have exposed their connections with these violent anarchists and at the news conference Director of Communications for the OFL, Joel Duff assaulted an alternative media photographer in an attempt to ensure their spin on the story and protest to follow the press conference would be the only one the public would see.

At the corner of Dundas and Yonge where the protest march was to start from, the first people to show up along with the regular members of the communist party of Canada (who are fixtures at these events) were the fake activists/anarchists that think they control all protest and social justice actions in this country. The big players this day were two people that were charged with violent offences during the G-20. Sayed Hussan and Alex Hundert. Hussan arrived with an arm load of slick and expensive protest signs. 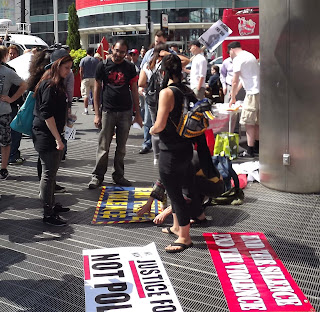 (One wonders who paid for these?)

But his real job this day was to ride herd over three young teenage girls who were to be the star of this show, Sammy Yatim’s sixteen year old sister and friends about the same age. The second these young naive girls showed up they were hustled onto the back of a pick-up truck complete with a sound system and microphone. In front of a crowd of about 500 people they were treated like rock stars for the day with big strong guys to keep back the press and anybody who might get close enough to ask questions. It was clear they were looking to Sayed Hussan for cues to what to say and chants to lead the crowd. Alex Hundert and others were there as well and many times though out the day I would see these girls look to these guys for what to do or say next. Now I don’t think these girls had any idea about the 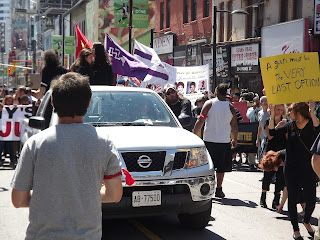 caliber, ethics or political designs these guys have. I don’t believe they even realized that they were being manipulated in a subtle ways by powers they most likely know nothing about.


At one point during the march I stopped to film the truck as it passed. This was my only intention, to get some stock footage that one of my friends might wish to use. This is when Alex Hundert and a few of his dupes decided they would let me know that my uncontrolled opinions would not be welcome. First he attempted to blatantly bully me, then he had a couple of his cult lackeys try to jostle me and block my shot by sticking their cameras in front of mine like they were filming me.
Their control over these young girls in front of a large crowd was a sad thing to witness when you knew what you were looking at. As these long time “cop haters” with a long history and skill at manipulating dupes at this type of event, they had these girls lead the crowd in chants you could see that they were uncomfortable with some of the chants, like “fuck the police” and even “Kill that cop” at one point. This film is a good example of that.
When Yatim’s sister realized that the chant they started for them was wrong she made an attempt to change it from Kill that cop to Jail that cop and from kill the police to jail the police. As I stated these young girls are naive and I don’t believe they shared the sentiment of the anarchists that were using them.

Once the march reached police headquarters on Collage Street the collection of broken miscreants and unintelligent dupes that this group of professional protesters have collected over the last couple of years were set to spew their vile hatred at the line of police who had lined up their bicycles to protect the building from the crowd now around 500.

These broken people and idiot dupes who were yelling and spewing hate at these front line cops (who were not the same police from the shooting) were in a way as subtly manipulated to be at this place and time because they too had been cultivated by the same group of fake activists to be there to do just this sort of thing.

These Fake activists, Anarchists, paid protesters, facilitators, call them what you will. These people are a group, a cult really. They are well financed and national. They have very real political intentions and their intention is to start a revolution and to facilitate a violent riot whenever possible. During this protest I could see ones I well recognized scattered throughout the crowd.  People like sakura saunders, 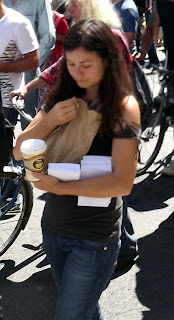 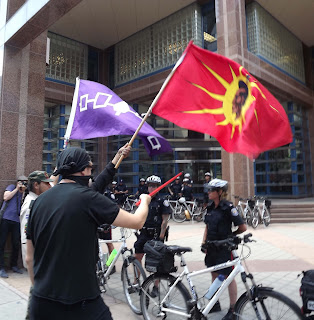 Or another well known cop baiter who enjoyed being up at the police line in his black bloc costume waving a donut on a stick, Zach Ruiter. Zach once
saw a picture of someone fishing the police with a donut and found it so cute he copies it every chance he gets. There were others that were scattered through the crowd to control and recruit. Yes I said recruit. They keeps lists of people and friend them on social media like facebook and twitter so they can get them out to protests and indoctrinate them into their socialist/communist  philosophy.

At one point a teenage girl in front of me turned around to tell an older woman who was talking to Greg Renouf not to talk to him. When I asked the girl why not? She said “Because he writes bad things about my friends, he tells lies!” I gave her a surprised look and said “what friends and what has he lied about?” At this her friend told her “Don’t he’s one of them too!” These young ladies had no idea who we are and have never read either of us I’m sure. What it does show is how these people are making up the minds of your children for them. This group for all intents and purposes are a cult. A cult with an underlying violence just swimming under the thin philosophical surface.

At some point a pro conservative supporter showed up with a cardboard sign saying “God bless the police” this man who I suspect was no brighter then those who swarmed him had the sign ripped out of his hands and was stomped and vigorously spit on by the dupes.
After a couple of hours the crowd started to thin out and the police started to clear out collage St. to let the streetcars though for rush hour. Alex Hundert and his gang stood their ground for a few minutes to make their point but there was no support to carry on with this sad act of defiance, there would be no riot this day. 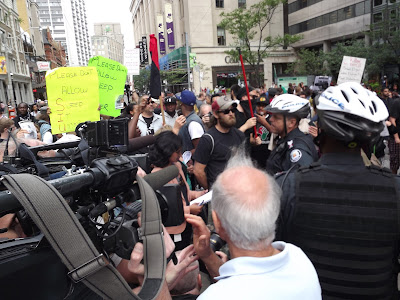 This was an important protest, a clear message needed to be sent to the police to let them know that the heavy handed American style of policing will not be tolerated in Toronto. Too many young men lie dead because of it. The shameful actions of many of those protesters did not help get that message across and the fake activists playing their political games does nothing to gain the support of honest citizens.

On my way to the subway a young man passed me talking to himself, all I caught was “I just want to see some violence!” Yes, this was a sad protest on so many levels.

:Thanks to Greg Renouf and Undercover Kitty for the film clips in this report.

Posted by Lawrence McCurry at 6:18 PM