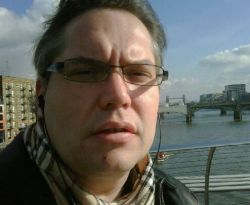 Local activists are abuzz over the blatant threat published yesterday by media co-op out of Vancouver against writer and true activist Greg Renouf over an article he wrote last week condemning violence in the social justice (fake activist) community.
In an article published under the pseudonym RENOUFISAGOOF  media co-op clearly crossed the line with the article titled “Greg Renouf: Dangerous Reactionary” . The article calls for Renouf to be “shut down  in whatever capacity possible” and  referred to him as a “dangerous right-wing reactionary” and a “racist”  As a friend of Greg’s I can assure you that he is neither right wing or racist. In fact I believe he was dating a black woman at one point. (sorry to tell tales out of school) Point is, this leftist social justice cult are the dangerous people and they are targeting Greg Renouf for pointing that fact out.
Cult? You bet I just used the word cult because that’s just what these people are, with some of them right down to matching gang tattoos. These social justice cult leaders (Or  facilitators as they called themselves during Occupy) rule over their group in much the same way other cults operate, praise for those acting in an approved manner and insults and social shunning for those who don’t toe the line. For those of us who out right oppose their little mind control game, we are branded as enemies of the people and labelled with names like right wing, racist, government agent, and the one they tried to hang on me misogynist. (My daughter burst out laughing when I told her to go look it up)
But what this article is attempting to do is not funny at all. These leaders are cowards, when four of them “masked up” and laid a beating on Greg last June in Kensington Market with one of their anarchist flag poles he ended up with a trip to the hospital and staples in his head. Well even though the Toronto police showed a lack of interest in investigating and arresting those responsible Greg was successful in getting a couple of beat cops to do their job and arrest one of them when Greg ran across him again at Ryerson University a month ago. He was recruiting students for their cult at a table and this activity was actually sanctioned by the University and/or the student union!!!
So now that one of them has been arrested for their violence against Greg they are attempting to get one of their zombies to do it for them. The first attempt to do this was at an OCAP rally, before marching on the Ontario Liberal convention a couple of weeks ago.

An attempt at mob violence did not come to pass however when one of these social anarchists grabbed the mic and started spewing lies to the crowd. I have to hand it to Greg in the calm way he handled this incident, He is a better man than I because I would not have been as calm and level headed as he and Frank were that day.
This brings us to this anonymous threat. Media Co-op and Rabbel.ca are the mouth piece of these dangerous socialist anarchists. It’s one thing to spread their blatant communist propaganda but it’s another thing when this platform is used to call out for violence to be committed on an individual just because you don’t like what he writes!
If media co-op does not care to be more responsible with what they publish and post in the future I'm sure they will end up dealing with more than an angry blog post from me, and I will be the first person sitting in a court room cheering on whoever it is that shuts them down  in whatever capacity possible.

Posted by Lawrence McCurry at 2:06 PM