A Night with Mark Howitt

A Night with Mark Howitt 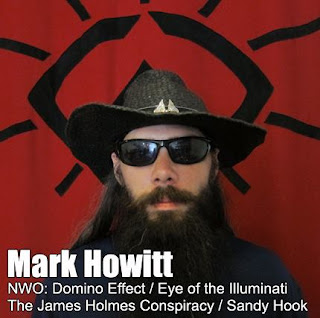 When my friend Patrick from Conspiracy Culture book store told me Mark Howitt was stopping by Friday night for a chat I could not pass up the opportunity to meet a guy who is far out there even for the most seasoned conspiracy theorist.
Howitt is an activist, music producer, writer, father and family man, but is best known for his slick You Tube films. He has been making films since 2009 and has become known for his films including NWO:Domino Effect, Eye of the Illuminati, The James Holmes Conspiracy and several others including one of his more recent films on the Sandy Hook shooting.
What I expected was a discussion of his films and reasoning behind his hard core brand of conspiracy theory, what I got was something completely different. What Mark really wanted to talk about was his current project The World Public Union, and his march across eastern Canada.
Upon arriving I met Mark on the street outside and was knocked off balance by his humble attitude and his keen interest in other’s opinions on the state of the world rather than relating his own. This continued on the inside where he addressed a small group of people who came out on a beautiful Friday evening to hear Mark talk about his challenging march from Sudbury Ontario to Toronto. Along the way Mark encountered injuries to his feet and legs as well as heavy storms. It was clear what he really cherished out of his trip so far was the people he met along the way and their opinions of the current state of the world we all share. He spoke of being a stay at home father and raising his two children. “I did not see the sense in working a minimum wage job so I could make just barely enough money to pay a stranger to raise my children” Mark said. Instead he started a music production company from home. When his wife lost her job due to downsizing and technical redundancy he left his life behind to create a reality show called the "March of Freedom". This included walking across Eastern Canada to speak with as many people as possible in the communities he visited to directly identify the problems and concerns that Canadian's face, as well as the problems that affect people all over the world. He is influenced by the work of William Cooper, Martin Luther King, Malcolm X, Robert Kennedy and many other notable figures who were killed for their attempts to create a better world.
Although you hear this message of peace, love and concern for one’s community from many so called activists these days, coming from Mark Howitt I did get the impression of deep sincerity and belief in this philosophy. Half way through his presentation one gentleman rose from his chair and accused Mark of promoting a “Socialist Utopia” and walked out the front door. This surprised me as I’m usually the first to call out a communist masquerading as a truther. I don’t believe this is the case with Mark however, Mark claims no political affiliations at all. What I found was a person with a sincere belief that there should be truth in media and government and we don’t have it. Mark does think we could have a better world if we all work towards that goal and he is on a quest to show Canadians that is possible.
Mark is on his way to Hamilton, Ontario next where he will meet with people at McMaster University for the March of Freedom event that has been set up there.
Below is a good interview shot by Daniel Libby after the event on Friday night.

(2009) The Formation Of Resistance

Posted by Lawrence McCurry at 10:43 AM