On Saturday, December 12, there was a protest outside of the office of Beaches-East York MPP Arthur Potts. 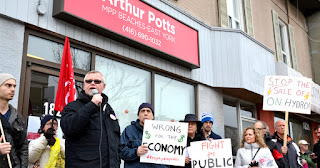 The protest seemed to be organized by unions and supporters for their usual reasons, but for once it’s hard not to agree with them. The selloff of Hydro One is wrong for so many very good reasons it’s hard not to view this move by Ontario’s Liberal Government as anything short of criminal.
For decades we have watched the World Bank and the IMF lend small countries large amounts of money, only to swoop in like vultures when the loans could not be repaid because El Presidente and the boys got it all. In picking the carcass clean the first thing the bankers usually do is turn the utilities (such as electricity, water and gas) over to corporate control. In Ontario nothing so drastic need take place, they need only tell their puppet Kathleen Wynne to dance.
In all fairness Kathleen Wynne is not alone in this criminal activity, her predecessor Dalton McGuinty also needs to be charged in this case as well. In fact as I write this article McGuinty’s chief of staff and his second banana have just been charged criminally in deleting e-mail that would have surly secured Dalton and Kathleen a place in Canada’s correctional system.
The way the energy portfolio has been buggered up under the Liberal government in Ontario goes way beyond the incompetent well into the realm of criminal malfeasance. The Gas energy plant cancelations alone cost us well over a billion dollars which the liberals tried to hide, add to that the cost of the green energy initiative, power that’s costing us more to produce than it’s worth, which we then sell at less than cost to the grid and the rising cost of this incredibly stupid plan just keeps rising.
It’s clear that the end game in this corruption is the fire sale of Hydro One to the corporate banking interests that our leaders really work for.
Not only has the government allowed the people of Ontario to be gouged on the cost of electricity for years, while the corporate board of hydro overpaid themselves, they have lost money on bad investments and planning and passed that debt off to the rate payers.
Over this time large business in manufacturing has fled the province (and the country) due to the high electricity costs.
And just who is benefiting here? The Royal Bank of Canada and Bank of Nova Scotia, which are acting as underwriters in the utility’s public debut, also have an option to purchase an additional 8.15 million shares, which would bring proceeds from the IPO to a total of $1.83 billion. On top of that another roughly $5 billion of that total would go towards paying down (interest on) the utility’s debt…..In other words the bankers are busting us up. Kathleen Wynne and Dalton McGuinty consider themselves too high up in the food chain to ever be held accountable and will be rewarded by the private sector in the end. It reminds me of an episode of The Sopranos.
Current family Capo, Kathleen Wynne has plans to use what’s left to fund the party’s next capper, a ten year, $130-billion transit and infrastructure plan.
In an honest World, That transit and infrastructure plan would be financed by a no interest loan from the Bank of Canada the way the system was designed to work.
In an honest world, instead of selling off Hydro One the government would take full control, cut costs by giving electricity away free. That’s right free. You would cut costs by getting rid of management, billing, meters and meter reading.(Not to mention stupid advertising costs) Generate much, much more in business and jobs that would return to Ontario for the free energy. Lead the boom in the auto sector by manufacturing electric cars that you just painlessly made a huge market for. Remember this is expensive electric power that we generate anyway and sell to the grid at a loss. This would even keep the fraudulent climate freaks happy.
In an honest World, We would have a government that was not bought, paid for and in the pocket of the private banking system. We would have a system where the creation of money and the financing of public infrastructure (Like Hydro) is done in the open, though a publicly owned bank, the BOC. And we could do this without changing one law that we don’t already have on the books. This was how the System was originally designed before Don (Lucky Pierre) Trudeau Sr. Was the “Head of the families”.
In an honest World, Kathleen Wynne and Dalton McGuinty would be charged with and stand trial for corruption and public malfeasance. The very crimes they have committed in the Real World.
Lawrence McCurry
December 18, 2015


Article originally Published in January 2015 edition of "Your Ward News"

Posted by Lawrence McCurry at 1:23 PM