Still days before the start of the G-20 conference in Toronto the protests are in full swing even though none of the political leaders have hit town yet. Not only does this show how displeased the Canadian public have become with the way the Harper government makes arrogant decisions that will affect all Canadians for years to come, but how disillusioned we have become with the Canadian political system.

From talking to some protesters I have also come to the conclusion that not only are Canadians not happy about the arbitrary decisions made by the government but the lack of realistic coverage from the main stream media on the issues facing Canada and the fact that they have dropped the ball when it comes to holding the government accountable for the little they do report on. Yesterday the media gave wide coverage to a poll by Harris-Decima that said three quarters of the people polled were “ok” with the one billion dollar price tag of the G-8,G20 conference and quoted pollster Doug Anderson who made comments like "They are important meetings, more for symbolism than productivity," Of course what they did not mention is that Harris-Decima and their mouth piece have long been the Progressive Conservative party’s polling company of choice and having worked very briefly for this company when it was called by another name and Brian Mulroney was running for office I can tell you that the outcome of any poll or survey can be rigged just by the way you ask the questions. Personally I find it hard to believe that seventy five percent of Canadians are “ok” with the obscene amount of money the government has put into this meeting.

Protesters hit the streets of Toronto yesterday amongst an overly large police presence that wrongly believed they could dictate the route the protesters would take and control the protest with sheer numbers of police in the sky, on bicycle, horseback and foot. While the protest remained peaceful they did manage to occupy a gas station for a short time and disrupt traffic in the downtown core to make a point to the police that were present. Their protest would not be controlled or shut down by the threat of violence and intimidation on the part of the Toronto police dept.

Today’s protest (June 22) in contrast was more like one big street party, 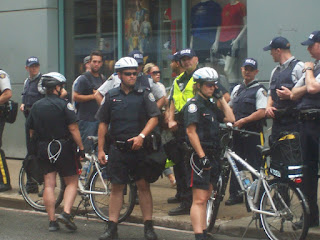 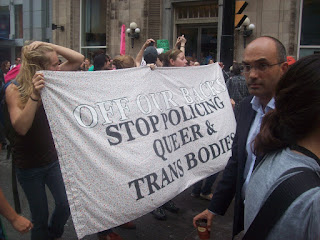 hosted by Toronto Community Mobilization Network and The Queer and Trans folk network. Spokesperson Roe Velasquez wished to let the leaders of the G-20 know that gay issues such as gay hate crime have been on the rise and must be addressed in Toronto and worldwide. At the start of the protest it seemed the protesters were almost outnumbered by media and police. Soon the crowd swelled to well over a hundred and fifty to two hundred people and the party was on. I spent some time chatting with an RCMP officer named Brian from Vancouver, A fifteen year officer who expressed his desire that things stay peaceful and talked about how much he was enjoying Toronto. We talked for about twenty minutes like two guys having a beer in a bar rather than a cop and protester. Unlike many protests the police at this protest seemed more laid back and friendly, When the protest moved off the sidewalk and into the road the police merely stopped traffic and let the protesters wander where they will. No attempt was made to control the protesters, try to tell them which way to go or hurry them along. Unfortunately I don’t believe this protest will set the tone for the rest of the week. Today’s protest was more like a dress rehearsal for gay pride day, something Toronto police are familiar with and have dealt with before. 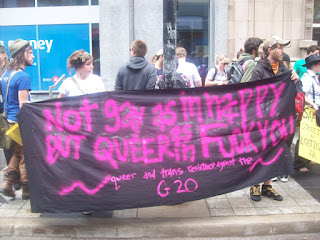 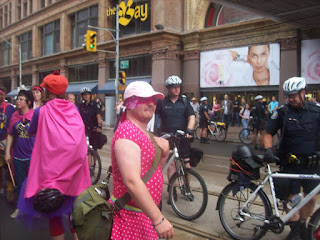 Last night the police had a chance to deal with a real security issue and blew it big time, in a spot where the security fence meets the entertainment district someone in a car pulled up around 3:00A.M. and fired two shots in the air, although the police were on the scene at the time the gunman escaped scot free. I doubt this guy was an anarchist, more likely just more gang violence that has plagued the neighborhood of the entertainment district that the police have not been able to control for some time. You would think with all the extra police they might have caught these guys just this one time.

As the week progresses the bigger protest marches will take place and we will see if the protesters and police can keep it somewhat civil or whether all hell will break loose.

Posted by Lawrence McCurry at 9:19 PM