On Wednesday at the G-20, Stephen Harper’s 1.9 million dollar fake lake made waves as a small earth quake was felt in Toronto. The tsunami in Harper’s lake is small potatoes compared to the wave of protesters that will hit the city on the weekend.

This week Harper endorsed new Sanctions against Iran in support of the United Nations and the American military complex. He is also playing host to Chinese president Hu Jintao who as well as attending the G-20 is making his first state visit to Canada as well. Hu said that China is ready to work with Canada to further expand exchanges and cooperation in various fields, push forward the China-Canada strategic partnership and bring even more benefits to the people of the two countries and around the world. It makes me wonder what people Hu is referring to here? In his own country this “strategic partnership” means slave wages and poverty and in Canada it means long lines at the unemployment office and food banks. Maybe the people Hu is talking about here are the ones that own Wal-Mart, as well as the corporate weasels and politicians that are getting rich off this partnership. All I know is that neither Harper nor any of the past Prime Ministers have asked me or any other Canadian if they thought it was a good idea to get so chummy with a communist dictatorship that has no regard at all for human rights.

Wednesday’s protest was a toxic tour of Toronto, about 300 people concerned about the U.S. oil spill and the environmental and social impacts of Canada's extractive industries such as the Alberta tar sands. The march was peaceful like all of the protests so far in Toronto. 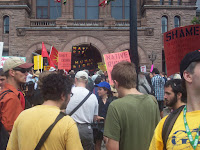 Thursday Morning brought me to Queens Park and the G-20 NATIVE RESISTANCE protest. This was the biggest protest so far this week. I got to the south lawn of Queens Park just after 11:00 A.M. and the protest was well under way with speakers and drummers on the steps of the Ontario Parliament building. 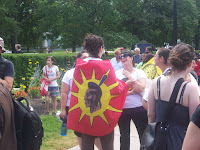 Most of the large police presence kept to the perimeter of the park as the native organizers had their own security presence in red t-shirts that made sure the protest remained peaceful. 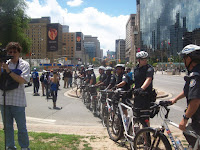 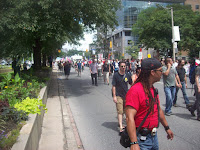 After about an hour of speeches and song by native leaders that wished to bring native issues and the state of our mother earth to the attention of the world leaders, the march started. Well over 1500 protesters and media then began the march down University Ave. with a large gang of police on bicycles riding ahead to line the route. 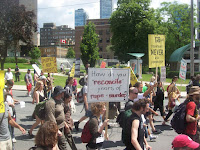 At one point I fell to the back of the march not moving as fast as I might have as a younger man and a friendly red shirted native security man bringing up the rear stopped to make sure I was ok and to warn me to keep up with the protest to make sure there would be no trouble with the police present. After a short stop to chant outside the American consulate the march moved on to the Eaton Centre at Queen and Yonge St.
After the march I paid a visit to the Convergence Space at 1226
Queen st. W, 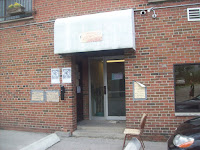 The Convergence space is run by the Toronto community mobilization network and is a sort of head quarters for all the protests that have been taking place in Toronto this week. Right at the door I was told that as an activist I was welcome to come in and put my feet up and have something to eat, as a journalist I was not welcome, no pictures, no interviews, with anybody, Period. 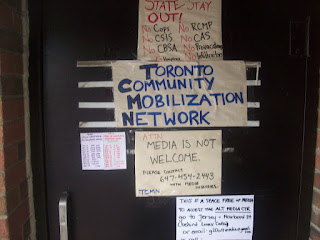 Since after a long march I was thirsty and tired I pocketed my note book and Camera and as a fellow protester I stepped behind the big black Curtain to a large open space. There were large tables with fresh food piled high and a water cooler that I made a bee line for. Pretty young tattooed girls were making food for protesters that I assumed were coming later and for the very short time I stayed I was made to feel welcome.

As southern Ontario and around the city is hit with severe weather, tornados and even an earth quake, The G-20 and the protesters are the issue that is foremost in the minds of the people of Toronto.

Amidst police paranoia and common type arrests that are being blamed on G20 security, the world leaders start to roll into town. As these leaders nosh on goodies and expensive drink prepared by a team of world class chefs at tax payers expense, young protesters spread their sleeping bags on concrete floors and give thanks for scrounged and donated food. You can’t help but catch the enthusiasm and dedicated spirit of these young protesters that only wish to make this a better world for all of us. Which is more than I can say for these fat cat world leaders that come to spin their secret plans.

The large protests start tomorrow, If this week has been any indicator the viloance and mayhem that the media and security generals have been looking forward too may not happen. Either way the downtown core will be hard to navigate and the next few days will tell. I’ll keep you posted. 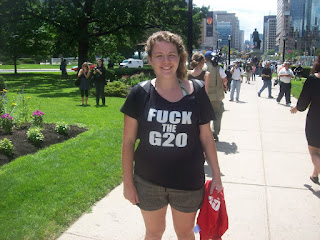 Posted by Lawrence McCurry at 6:59 PM